The Petersen film collection is comprised of 8mm and super 8mm film shot by Andy and Florence Petersen within the Whistler Area from 1955-1975. 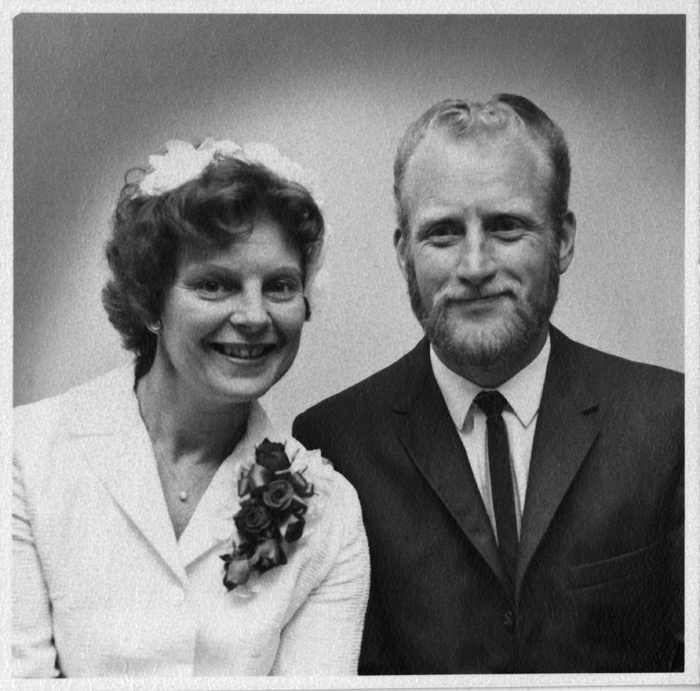 Florence and Andy on their wedding day in 1967.

Longtime Whistler resident "Flossie" Petersen witnessed many changes to the Whistler community throughout its history - evolving from a cottage community to an international resort. Florence, a teacher from Burnaby, bought a cottage on Alta Lake in 1955 with four other teachers, where they spent many fun-filled holidays and weekends swimming, hiking, and socializing. You could say they were the first wave of "weekend warriors" to discover Whistler.

Florence met her husband Andy, a carpenter, at a Saturday night party at Rainbow Lodge and they married in 1967. Florence continued to teach in Burnaby, but spent her weekends with Andy at Alta Lake. In 1983 Florence retired from teaching and moved to Whistler permanently.

Florence and Andy had an incredible impact on the community. Florence served many years as a marriage commissioner and Andy was involved with many construction projects, including serving as the building superintendent at the Rendezvous Lodge on Blackcomb during its construction.

The films contained in this collection give a very intimate look at what life was like in Whistler prior to the development of Whistler Mountain in 1965 and the transitional years that followed.


This project was made possible in part through:

The Fund annually offers an award of $1,000 to a community archives in British Columbia to assist in the work of acquiring, preserving, indexing or disseminating information on the archival documentary heritage of British Columbia in the broadest sense of the word. The award is administered by the Friends of the British Columbia Archives.. For more information click here.

We appreciate your generosity and making this exhibit possible, thank you!

Holiday Hours at the Whistler Museum 2019

December 19th, 2019
The Whistler Museum will be making a few changes to our hours over the holidays.Tuesday, December 24: Open 11-2Wednesday, ...Click here to read more detail about 'Holiday Hours at the Whistler Museum 2019'